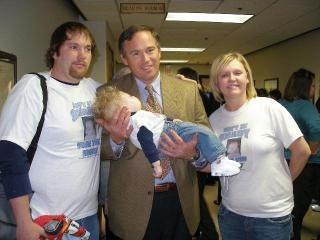 The Evanosky Foundation was involved with promoting and advocating for newborn screening efforts in the State of Missouri. House Bill 716, the Brady Alan Cunningham Newborn Screening Act passed the Missouri Senate on May 4, 2009, with a 31-2 vote. It was signed into law by Governor Jay Nixon on July 8, 2009. House Bill 716 mandates newborn screening for Krabbe, Pompe, Fabry, Neimann-Pick and Gaucher diseases — the same diseases that The Evanosky Foundation advocated for in Illinois SB1566, which was passed in November 2007.

Please click here to read a news article about HB 716 that appeared in the March 4, 2009, edition of the Daily Dunklin Democrat.

My first bill (House Bill 716) was heard in Health Care Policy Committee on Wednesday. The bill establishes the Brady Alan Cunningham Newborn Screening Act which will require, by July 1, 2010, the Department of Health and Senior Services to expand newborn screening requirements to include certain lysosomal storage diseases. The department will be authorized to increase the current fee associated with newborn screening tests to cover the additional cost of the expanded newborn screening tests. At present, there are 67 disorders tested and this will add 5 more. The hospitals will not see anything different as the blood drawn from your baby’s ankle after birth will not change – no more or no less. A drop of this same blood will be used for the new testing at the state lab.

Brady, the baby the bill is named after, is 10 months old, and lives with his parents in District 163. At birth, he appeared to be picture perfect, and continued to be the typical baby boy of every parent’s dream until the age of 4 months. At that time, Brady started crying non-stop. His smiles stopped. His eating stopped as he could no longer suck or swallow. A trip was made to the emergency room – and one month later Brady was diagnosed with leukodystrophy (Krabbe), a disease that destroys the central nervous system. The life expectancy for children with this disease is about 13-14 months of age. At present, Brady can still open his eyes and has some eye movement. He can still hear but eventually will lose both eyesight and hearing. Brady must receive his food through a feeding tube and is on morphine and ativan every 4 hours for pain to try and make him more comfortable. He takes chloral hydrate at night so that he can sleep. Eventually respiratory complications will set in. All of this could have been avoided, had our state had this bill in effect.

A minimum of 10 children are born each year in Missouri with the 5 metabolic disorders addressed in House Bill 716, referred to as lysosomal storage disorders. Lysosomal storage disorders are disorders which, in some cases, such as in the case of Krabbe disease or infantile Pompe disease, are invariably fatal if treatment is not instituted promptly. In the case of Krabbe disease, treatment is only effective if provided prior to the onset of any clinical symptoms. The hope for children with these disorders and the hope for their families is newborn screening.

I am hoping insurance companies will be on board with us. I can’t imagine testing ($50) to not outweigh the costs incurred once the disease is allowed to progress. It is important to remember that children will be born with these diseases whether there is screening or not. They will continue to suffer and die if undiagnosed but with early detection and effective treatment obtained, Krabbe disease no longer needs to bring death and despair to those who receive its diagnosis.